DSEK is Directorate Of School Education, Kashmir. School education is an important segment of the education system which contributes significantly to the development scenario in the state. While primary education provides the foundation that is reinforced at the secondary level, the other two form a central component where thousands of children are positioned in various vocational choices and alternatives.

Total enrollment of student up to higher secondary level in Govt. Schools in the Kashmir Valley are 10.03 lakh, with 5.29 lakh male students and 4.74 lakh female students. Student enrollment has increased by 9.77% during 2006-07 as compared to the previous year.

In this regard, the Directorate of Kashmir School Education has already established BHSS Ganderbal, GHSS Anantnag, BHSS Bandipora, BHSS Budgam, BHSS Baramulla, GHSS Kulgam, BHSS Kupwara, BHSS Pulwama, GHSS Shopian, SPHS Srinagar Coaching Center and GSSS Srinagar. . Super-50. . As per the schedule already released, the last date for submission of the prescribed application form is December 10, 2019, accepts that the cards will be issued on December 11, screening test on December 15, declaration of results on December 18 and in the entire Kashmir division. Formal classes at 11 designated centers will begin on December 23, 2019.

A statement issued by the Kashmir School Education Directorate said that Super-50 is a comprehensive free training program and is intended for applicants to take IIT-JEE, NEET, JKCET and allied examinations. The candidate list of Pertinently Divisional Level will be prepared on the basis of merit obtained in the entrance examination and the candidates will be given admission to the program at Mandal level campus in Srinagar besides the list of 50 students from each district. PCB and MCB will also be given admission in the program in the respective district coaching by the district.

Director of Kashmir School Education, Mohammad Younis Malik said that all the arrangements including the availability of experienced personnel, heating and lighting are being implemented to start the training. He said that this program has proved to be very successful and a good number of candidates have given the exam in the form of JEE, NEET, etc. He said that students should go to the scheduled training centers by December this month to complete the paperwork. He said that in the first phase, the list of selected candidates will be available at the district offices and on official website of dsek.

Officers who were promoted included 73 Junior Assistants as Senior Assistants, 53 Class IV as Junior Assistants, 0 Junior Librarians as Librarians, 2 Library Assistants as Junior Librarians, 35 Laboratory Assistants as teachers. , Includes 152 class IVs as laboratory assistants, 7 class IVs as a library assistant and I-Chaff as a driver . Apart from this, the charge of 267 teachers was also confirmed. DSEK has also approved on-site promotion to 1136 officers in the last three months, including 1092 teaching and 44 non-teaching. These include 158 cases of Anantnag, 162 of Baramulla, 47 cases of Bandipora, 222 of Budgam, 148 of Pulwama, 78 of Ganderbal, 71 of Kulgam, 136 of Kupwara, 65 of Shopian and 49 of Srinagar district.

So, That’s all about the latest updates of DSEK Srinagar. Stay Connected and keep visiting jkjobsadda.com for more updates. 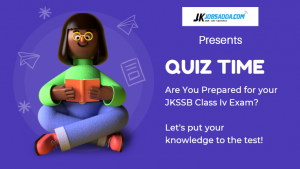