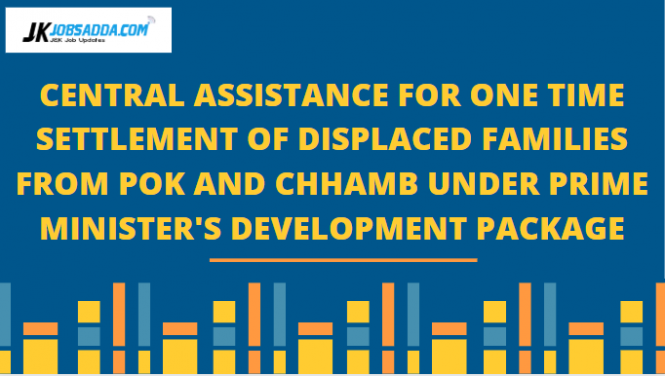 Here’s all you need to know about the CENTRAL ASSISTANCE FOR ONE TIME SETTLEMENT OF DISPLACED FAMILIES FROM POK AND CHHAMB UNDER PRIME MINISTER’S DEVELOPMENT PACKAGE – 2015.

Hon’ble Prime Minister, during his visit to Jammu & Kashmir on 07.11.2015 announced a Development Package in which there is a component of one-time Central Assistance of Rs.2000 crore for rehabilitation package for 36,384 families displaced from PoK and Chhamb and settled in the State of Jammu & Kashmir.

The proposed package is in continuation of a series of relief and rehabilitation packages extended by the Government of India/State Government of J&K from time to time in the past. Despite the several rehabilitation packages extended by both Central and State Government in the past by way of agricultural land, housing plots, houses and other facilities along with cash assistance, the Displaced Persons (DPs) of PoJK and Chhamb have been approaching the Government time and again for payment of compensation against properties they were forced to part with due to war and hostilities.

The Government of J&K vide their letter dated 20.10.2014 had sent a proposal of rehabilitation package for one time full and final settlement of the claims of 36,384 families of PoJK and Chhamb DPs. The State Government had proposed a payment of Rs. 25 lakh to each family as a one-time compensation, amounting to a total of Rs. 9096 crore.

Central Government has carefully considered the proposal and the demands of the DPs has taken a view that past rehabilitation packages from the year 1947 onwards have helped the displaced families in a variety of ways. The displaced families have already been given agricultural land/ homestead plots, houses or cash compensation through various schemes. In that backdrop, Central Government considers a package of Rs. 5.5 lakh cash benefit per family as reasonable amount, which can help these families to run a small business or other land-based activities that can give a reasonable monthly return. Even if the amount is invested in an annuity scheme, the monthly return will also provide a dependable support system on sustainable basis.

APPROVAL OF THE SCHEME

The scheme has been formulated with the approval of Hon’ble Home Minister.

OBJECTIVE OF THE SCHEME

The Scheme being a component of the PM’s Development Package for J&K-2015, aims to provide supplementary financial assistance so as to enable the families to run small business or to undertake scientific farming, livestock or other land-based activities, which can provide the displaced families some assured and sustained earning. The amount of assistance can also be invested in any annuity scheme, which can give an assured monthly income on sustainable basis. The scheme will have a State share of Rs 308/- and Central share of Rs. 5,49,692/- per family, amounting to Rs 5,50,000/- per displaced family.

ELIGIBILITY OF THE BENEFICIARY

The Claimant/Head of the DP family or his/her successor or heir residing within the State should be part of the overall category of 36,384 families belonging to any of the following categories:

The concerned Deputy Commissioner shall ensure the amount of State share of Rs. 308/- in respect of an eligible displaced family is directly transferred to the bank account of the beneficiaries. All transaction should be through Bank and no cash transaction shall be made.

A Committee under the Chairmanship of Additional Secretary in-charge of FFR Division with suitable members from IFD/CCA(Home) and any other member as may be decided will monitor the implementation of the scheme.
Similarly, a Committee at the level of the concerned Divisional Commissioner with representatives of the Provincial Rehabilitation Office (PRO)/concerned
Deputy Commissioner and other suitable members as may be decided by the State Government shall monitor the disbursement of the State share of the financial assistance at the District level.

The process of disbursement may be completed within a period of 4 months from the date of release of fund.

Update: The process of disbursement under the scheme have already been completed for the amount which was approved by the centre i.e, 5.5 lakhs to each displaced refugee family of J&K.

However, the state Govt. had proposed 25 lakhs to each displaced refugee family but till now, the rest of the amount is not yet approved and there is no official statement or document by the Government in this regard.

We will update this article as soon as there will be any official update by the government.

Disclaimer: The information provided in this article is sourced from the official website of Ministry of Home Affairs, India (https://www.mha.gov.in/) for the information to the general public and JKJOBSADDA.COM does not claim the authenticity of the information.